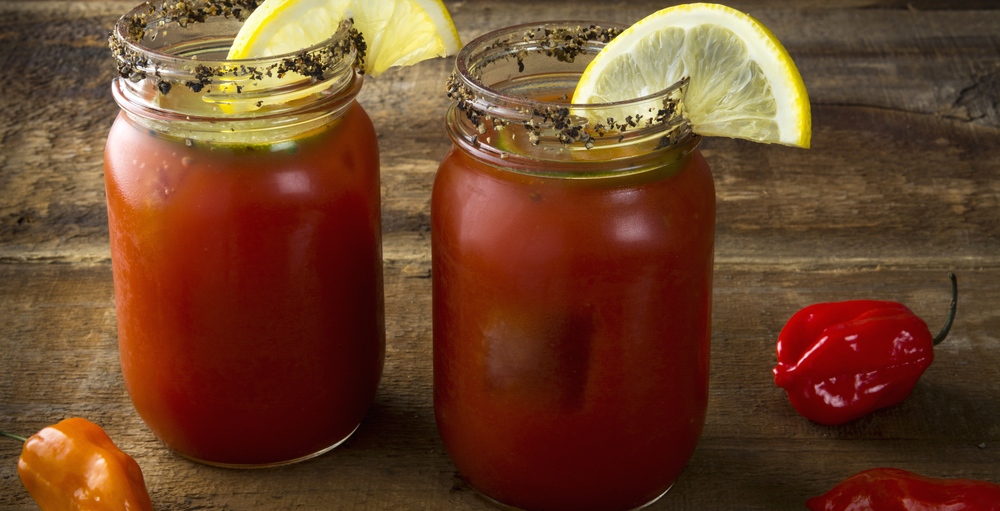 That’s pretty much Canada in a flash.

On Thursday, May 17, Canadians are encouraged to celebrate our signature drink with National Caesar Day!

The recipe is simple: vodka, Clamato juice, Worcestershire and Tabasco sauce, and the ironic salted rim. But the creativity is what makes it great.

Every restaurant puts its own little spin on the classic cocktail and whether it’s a simple mix or an elaborate mug, they’re all mighty tasty.

Luckily for you, we’ve found the seven best Bloody Caesar spots you’ve got to try in Montreal to kick off National Caesar Day.

This cozy little pub lives right on the line between NDG and Westmount and has one of the best wing deals in Montreal on Sundays. Don’t let those 29 cent wings fool you – they also make a mean, classic caesar. So good they offer Bottomless Caesars on weekend afternoons for $25. Their take on the Caesar isn’t too complex, they keep it simple but they do simple well. It’s served in a celery-salt-rimmed stem glass and every sip is a balance between flavours.

They’ll even add a touch of horseradish at your discretion if you’re feeling zesty. Try to get there early on Sunday afternoons and fuse the Bottomless Caesar deal with the wing special and you may never leave.

Where: 5175A Rue Sherbrooke Ouest

You can’t go to an oyster and seafood restaurant without expecting their Caesars to have a little something floating beneath the surface. Lucille’s is beautifully decorated to give you that Maritime feel and they dress their Caesars in a similar fashion. Lucille’s Caesar may seem ordinary. It’s garnished with a celery and a lime but submerged in the Clamato juice is an oyster, shrimp, and crab leg. With Lucille’s, it’s clearly what lies beneath that counts.

Head to Reuben’s Deli for a traditional Montreal smoked meat sandwich and toss in a  Caesar on the side, that way you’re getting layers of Montreal and Canadian specialties. Reueben’s approaches their Caesar in the traditional form in a high ball glass but they season the rim with Montreal Steak Seasoning. The Reuben’s Caesar isn’t overly spicy but it’s subtle and refreshing, perfect for if you’re looking for a conventional Caesar.

Arthurs Nosh Bar is a traditional Jewish deli. They’re known for sandwiches, breakfasts and shared tables in a stylish and open space. They also have block-long lines of hungry and thirsty patrons every weekend for brunch. Well worth the wait. For a restaurant that specializes in sandwiches, don’t be surprised when your Caesar arrives with a lox and bread cream cheese bagel attached to it. It’s served in a cooler glass, rimmed with steak spice and is secondarily garnished with a pickle and citrus. It’s heavy on the horseradish side and definitely gives a kick. If you’re in the mood for a loaded Caesar – Arthurs is your spot.

If you’re playing the Caesar game, you’ve got to give the Old Port some love. Especially when world renowned chef Chuck Hughes owns the place. Garde Manger’s Caesar mimics its Old Port local – classy and elaborate. It’s served in a medium tumbler and the cocktail’s crab leg makes it seem like it just might tumble. Rimmed with their in-house steak spice, Garde Manger’s Caesar is a bit heavier and spicier than most but everything is made internally and you can definitely taste the difference.

Kampai feels like a magical garden get-away right smack in the middle of downtown. They’ve done a nice job fusing the business crowd with students and customers can go to Kampai to eat, drink, play pool, dance or relax in the calm gardens. They’ve approached their Caesar the same way. It’s served in a white wine tumbler, topped with olives and a lime. It’s balanced perfectly with flavor and a bit of spice. They also offer it with Hendrick’s premium gin if you want to change up the order a bit.

L’Gros Luxe is well known in Montreal for its grilled cheese and macaroni and cheese. They’re also the most extensive Bloody Caesar builders in town. It’s served in a variety of sizes and glasses ranging from mugs to steins. Each Caesar is made the same but is garnished completely different. The Caesar itself is very flavorful thanks to the heavy dose of worcestershire sauce but you go to L’Gros Luxe for the toppings. The smaller-big Caesars are topped with cheese sticks, onion rings, burgers or grilled cheese and the Gros Luxe Caesar features it all. It’s nice to know there’s a cocktail in Montreal that can substitute as a full meal.