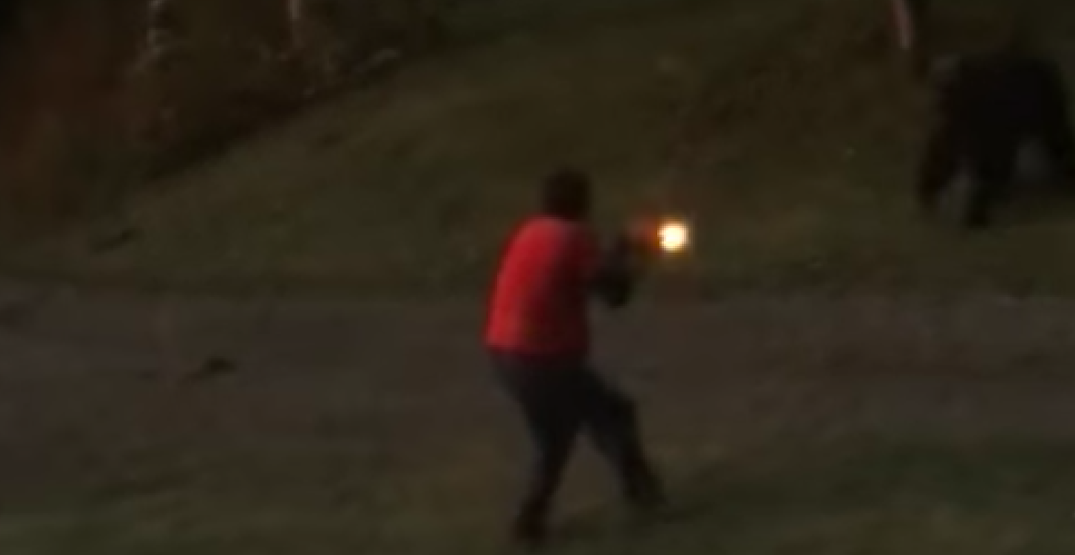 A man shot at a grizzly after it charged him in Bella Coola. (YouTube screencap)

A man in the BC community of Bella Coola is receiving both praise and criticism for the way he handled a recent grizzly bear encounter in his front yard.

The reaction comes after video of the incident was posted online by YouTube user J LM.

In the video’s description, J LM defends his actions and breaks down what happened.

He writes that before the encounter, “dogs were barking and noticed bears by the tree.”

In response, he says he “loaded [a] 12-gauge shotgun with three birdshot shells with the intention of shooting in the air to scare them away.”

The video then shows him firing two shots.

The sow began “walking her cubs away” which J LM said he took as a sign of submission.

“[I] went outside again, and when she got 65 yards away, I shot in the air again to keep pushing her along. After that shot, the sow turned around and looked at me and I yelled at her to keep moving her on.”

Then, in an instant, the situation changed.

“The sow turned and charged, head down, ears back, and hair flat,” he writes.

“I knew this was a serious charge and I only had one shot left (of birdshot).”

Noting he’s worked around bears on the river with fisheries for over 30 years, and has gone through repeated bear-training programs, “I knew that if I turned and ran, there would have been contact.”

With his options now limited, J LM writes that he “didn’t want to blind her by hitting her in the face,  so [I] aimed at her right side to hopefully trip her up to buy me enough time to run inside the house. I waited as long as I could, until she was just across the driveway and then I hazed her, which did trip her up so I turned and ran inside the house.”

The sow “kept coming towards the house with her mouth open, ready to bite me, and I slammed the door.”

He says the last thing he remembers is “gravel hitting my truck as she turned and ran back (four limbs working fine) and took her cubs away.”

J LM writes that after the incident he “tracked her and her cubs a ways off our acreage; there was no blood, no hair and I know she’ll be sore but she’ll now think twice about approaching people.”

He notes that he’s also informed Conservation Officer Services (COS) of the situation.

On Wednesday, COS confirmed with Daily Hive that an investigation into the incident had been launched, but declined to offer any further comment.