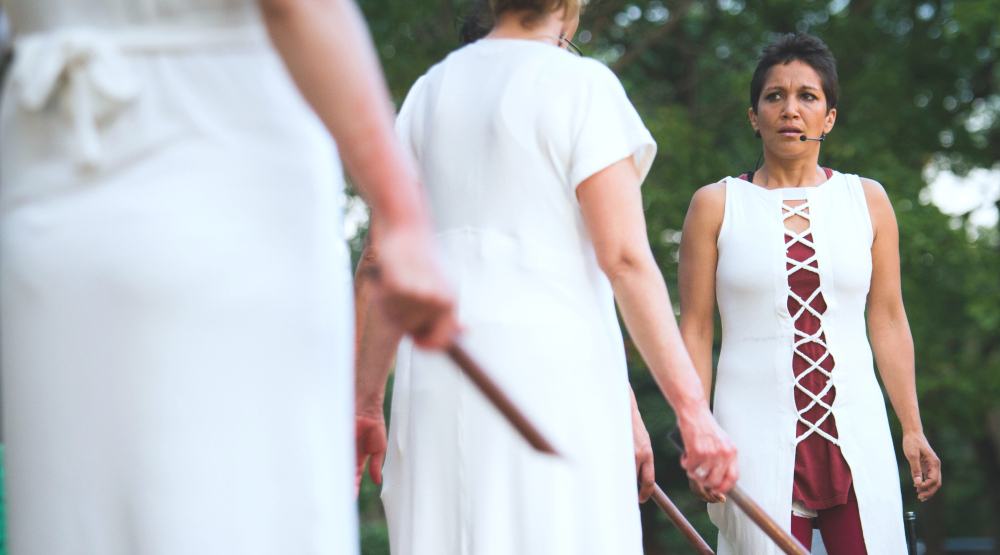 This past Wednesday night a friend and I packed a blanket and headed over to beautiful Westmount Park to take in Repercussion Theatre’s Shakespeare in the Park production of The Tragedy of Julius Caesar.

It was a gorgeous summer night. Humidity and heat were hanging in the air, but there was absolutely no chance of rain and with the production just a few minutes away from my home, I knew that there was never a better time to catch the show. Summer goes by fast in this town and too many things can compete for your attention. If you postpone things too much, you end up never doing anything at all.

It was already swarming with people of all ages by the time we got there, lawn chairs and blankets everywhere, but we quickly found a spot near the stage. As we waited for the show to start, we unpacked the picnic basket containing two bottles of red wine (we’re Montrealers… one would never do), three amazing Quebec blue cheeses from Verdun’s Fromagerie Copette + Cie., and some delicious artisanal nut bread and crackers. 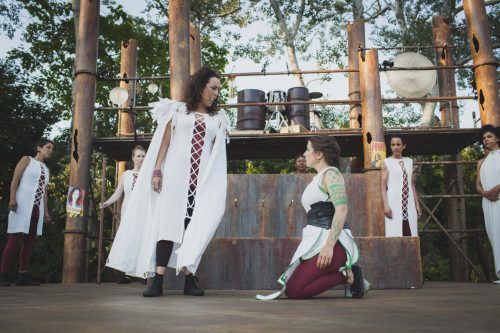 There is something magical about being able to sit under the stars on a beautiful summer night listening to words written in 1599 while sipping on wine and indulging in good food. There is also something quite interesting about watching an all-female cast performing such a “masculine” play (since war and politics have historically been male arenas), a play written at a time when all roles were performed by men, and people were debating whether women even had souls (spoiler alert: more than 400 years later the Landover Baptist Church still thinks they don’t.)

Since all roles were performed by men in Shakespeare’s times, there’s a sense of “righting” things, a sense of tipping the balance in the right direction, if only for a moment, by having women perform all the roles in this production. Women are still severely underrepresented in movies and theatre productions around the world, so it’s a welcome change of pace to see the Montreal theatre company go against the tide.

“On Shakespeare’s stages, white men were the default of ‘neutral’ canvas onto which the entirety of humanity was meant to be painted,” explains director Amanda Kellock.

“I don’t think we’re changing Shakespeare’s intention – simply removing a limitation under which the shows were first produced.” 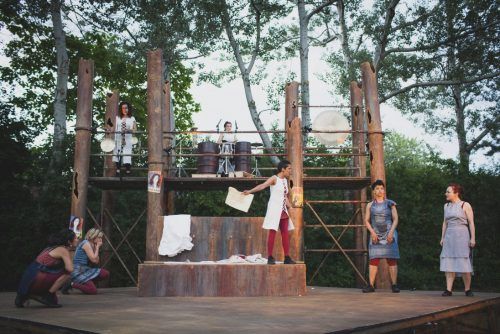 Not only is the cast comprised of all women, it’s a wonderfully diverse and multicultural cast that manages to better reflect Montreal’s cultural and racial diversity than any local political party, police department, or Gémaux Awards Show I’ve seen lately.

One after one another, these amazingly charismatic and talented women appear on stage reciting complex and meandering lines with gusto and attitude and I – someone who has a hard time remembering a single telephone number – marvel at how they can even memorize them all. Don’t be fooled by the casual park setting, this is a professional production with top notch actors.

Shakespeare productions are not for the faint of heart, but every single one of them is up to the challenge. They stomp, they yell, they murmur, they sing, they sneer, collude and conspire, assuage, and murder with conviction. By the time the Ides of March are here and Julius Caesar utters “Et tu, Brute?” as he’s repeatedly stabbed to death by those he trusted, I think every single person in that audience had stopped noticing that the cast was all-female. It didn’t matter anymore. It was just a competent cast that had managed to take us on a journey, the way only good theatre can. 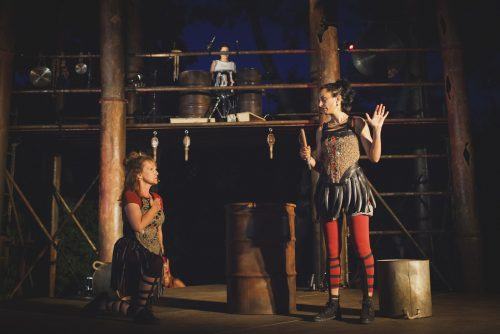 In the front row, a few blankets over sat a young family. The mother breastfed her baby, while their daughter (who looked to be around five), tiny hands elbow-deep in a bag of goldfish crackers, was mesmerized – eyes as wide as silver dollar bills throughout the show – and I was filled with gratitude for a production company whose goal is to reach average folks by making themselves accessible (by going to local parks and staging free-of-charge productions) and perhaps help raise a brand new generation of theatre-lovers.

There are no weak links in this production (props to Leni Parker, Tamara Brown, Holly Gauthier-Frankel, Warona Setshwaelo, Gitanjali Jain, and the entire cast). Everyone elevates it to wonderful heights, but I would be remiss if I didn’t mention Deena Aziz’s commanding performance as Marcus Brutus. I couldn’t keep my eyes off her.

The themes of Julius Caesar (honour, friendship, patriotism, political turmoil) are as universal and timeless as they come. Time moves forward, but humanity in all its flawed complexity remains. There’s a reason why 400 years later Shakespeare’s beautifully written plays still speak to us.

Listen to Caesar speak on political ambition and tell me it’s not a timeless theme.

“Let me have men about me that are fat;

Sleek-headed men and such as sleep o’ nights:

Yond Cassius has a lean and hungry look;

He thinks too much: such men are dangerous.” 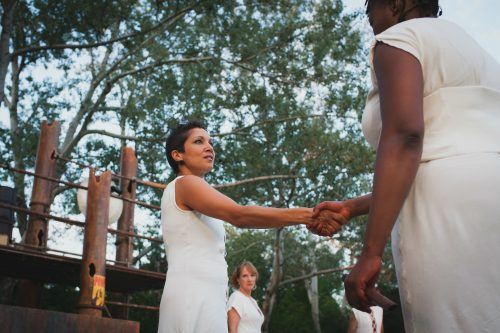 I hear you, Caesar. Your instincts were good, you should have followed them and you could have saved yourself a stabbing.

There’s a reason why Repercussion Theatre has been putting on these productions for 26 summers now and we always keep coming back for more. Every summer, since 1988, over 13,000 people have gathered in parks in and around the city, to delight in the language of the Bard, and I don’t think that will change.

There are still plenty of performances around the city (from Nuns’ Island to Morin Heights, to Dorval and back to Westmount again) so check the tour schedule and head out for a performance near you. Shakespeare in the Park is truly a must-see Montreal event during summer.

Honestly, you get to see a bunch of kick-ass chicks recite some killer lines in a visually engaging production, while sitting under the stars drinking and eating. How in the world does it get any better than that?