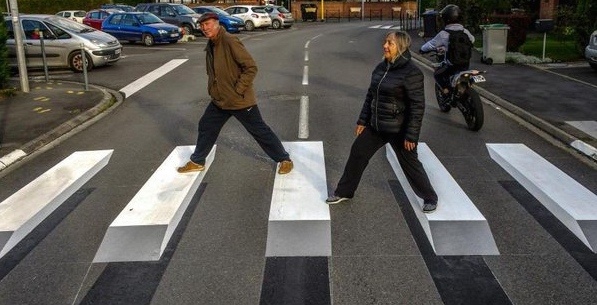 Projet Montréal will be tricking motorists in an attempt to get them to slow down at a pedestrian crosswalk in Outremont.

A 3D optical illusion will be painted on the road, using colours and shadows to create depth, designed to grab drivers’ attention.

The crosswalk will be tested out on Outremont’s busy Avenue Bernard in the hopes of having vehicles and bicycles brake while giving way to pedestrians.

Avenue Bernard was chosen as the illusion’s test subject because of its high traffic, both on foot and on the road. If the attempt to calm the street becomes successful, Projet Montréal will implement the tricky maneuver to other busy intersections around Montreal, prioritizing pedestrian safety.

3D street illusions have become popular in France and Iceland as an alternative to speed bumps that are damaging too many vehicles in the long run.

Outremont’s new 3D crosswalk, on the corner of Avenue Bernard and Avenue Champagneur, will be completed by the end of the week.