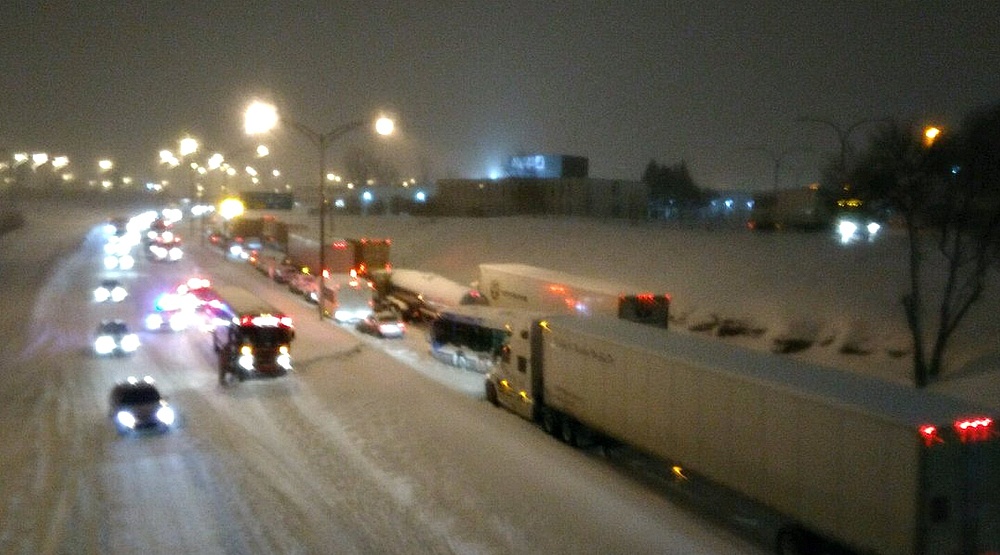 So far, Montreal’s most insane winter storm of 2017 saw a 50 car pile up outside Magog and Montrealers being forced to push STM buses out of the snow just to get home.

In addition to all this, it was reported earlier today that another pileup occurred on Highway 13 late Tuesday night resulting in early 300 cars being stranded on the highway.

The pileup on Highway 13, between Highway 20 and Highway 40, resulted in its closure at 8pm on Tuesday, leaving many cars stuck on the road with no way of exiting.

According to the Sûreté du Québec (SQ), it was a jackknifed tractor trailer that set off the domino collisions.

The SQ went on to say that the highway was officially closed as of 8pm on Tuesday night, however cars did not begin to be cleared until Wednesday morning.

One person stranded on the highway was George Tylpaldos, who told Global News that he was stuck in his car for 13 hours before a tow truck arrived at the scene at 7am Wednesday morning.

Earlier this afternoon, Montreal Mayor Denis Coderre tweeted out a detailed sequence of events regarding the night prior.

Though response teams were undoubtedly slow to make it to the scene, all tickets issued by towing companies are going to be refunded, stated Quebec’s Transport Minister, Laurent Lessard.