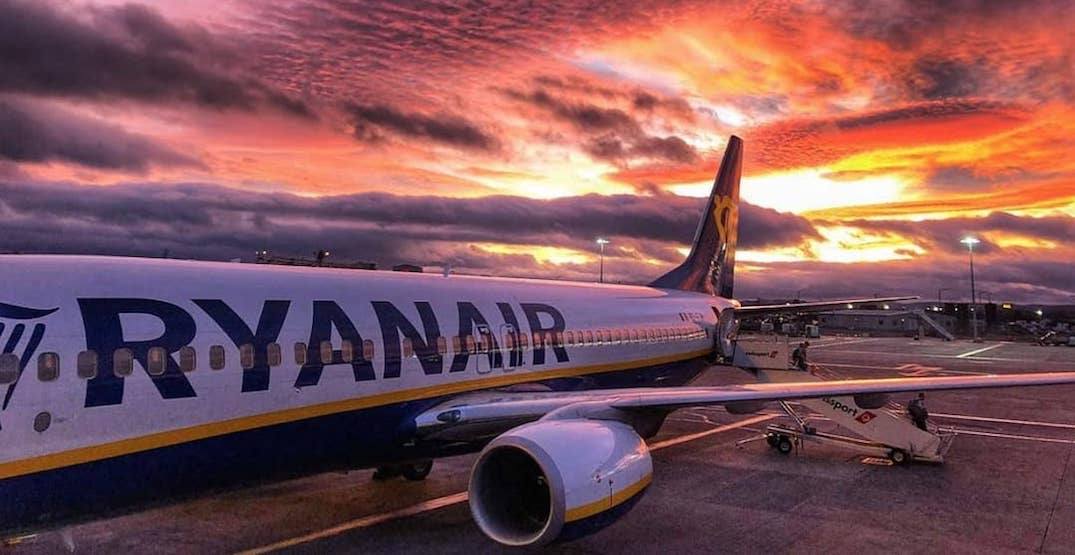 A Ryanair plane docked at the Edinburgh Airport during sunset (Ryanair/Instagram).

Budget airlines Ryanair & Wizz Air are currently under fire this week for their latest baggage policies. But why?

According to Antitrust, formally known as the Italian Competition Authority (ICA), it is “misleading” to charge passengers for their carry-on luggage.

The competition watchdog says the practice allows these budget carriers to advertise ultra-low prices and profit from them later, as customers rack up add-ons like checked baggage and seat selection. The ICA opened an official inquiry to determine whether or not this could be considered price distortion, given that hand luggage is “an essential element of transport.”

The inquiry aligns with their mandate to protect consumers and regulate against unfair trade and false advertising.

Both Ryanair and Wizz Air introduced new baggage policies in 2018. These new rules entitled passengers to one small handbag that could fit beneath the seat in front of them. Anything larger has been tagged with a fee.

Wizz Air’s baggage policy states: “One free carry-on bag up to a size of 40 x 30 x 20 cm onboard to be placed under the seat in front of you.”

Both airlines have introduced a new 10kg check-in bag option, encouraging passengers to stow and pay for what no longer fits in their carry-on.

Ryanair’s baggage policy reads: “All passengers are entitled to bring one small personal bag on board which must fit under the seat in front of you (40cm x 20cm x 25cm). Examples include handbag, laptop bag, and a small backpack.”

Antitrust released a statement saying, “The request for a supplement for an essential element of the air transport contract, such as hand baggage, provides a false representation of the real ticket price and spoils the comparison with the rates of other companies, misleading the consumer.”

Ryanair spokesperson Kenny Jacobs pointed out that one piece of free carry-on luggage is allowed.

“We look forward to cooperating with this Italian inquiry. All Ryanair customers are free to bring one piece of carry-on bag on board. But no airline customer has a right to unlimited carry-on bags. For safety reasons, most short-haul aircraft cannot accommodate two carry-on bags for each customer,” he said, in a statement.

Only, he did not comment on how small the allowed carry-on luggage is.

Wizz Air gave a similar response: “The airline’s clear and fair baggage policy guarantees all passengers can bring one free carry-on bag into the aircraft cabin on all Wizz Air flights.

“The policy offers the widest selection of baggage choices to passengers, allowing WIZZ customers to select from more than 50 carry-on and checked in baggage variations based on their individual preferences.

“Wizz Air believes that this transparent and clear approach to baggage policy will contribute to a more comfortable and quicker boarding, a better customer experience and at the same time enhance the airline’s on-time departure performance.”

In February, the Italian courts ruled that the policy constituted unfair pricing. Ryanair and Wizz were fined a total of €4 million ($5.9 million CDN).

Of course, the airlines fought back and the fines were recently suspended, pending a second inquiry. Both airlines are free to continue their new baggage policies until the previous decision is upheld or a new decision is reached.

The case is a telltale sign of ever-shrinking airline baggage allowances and ever-increasing add-on fees that many airlines, particularly budget carriers, structure their policies around.

By contrast, other airlines such as Air New Zealand are striving to make certain elements of air transport free. Air NZ recently announced plans to roll out free inflight Wi-Fi and are in the process of outfitting their entire fleet.

With airline policies undergoing constant change, passengers should always double-check baggage policies before purchasing tickets. It’s also beneficial to factor in the cost of add-ons (such as seat selection, meals, and inflight Wi-Fi) when scanning for the best deal.