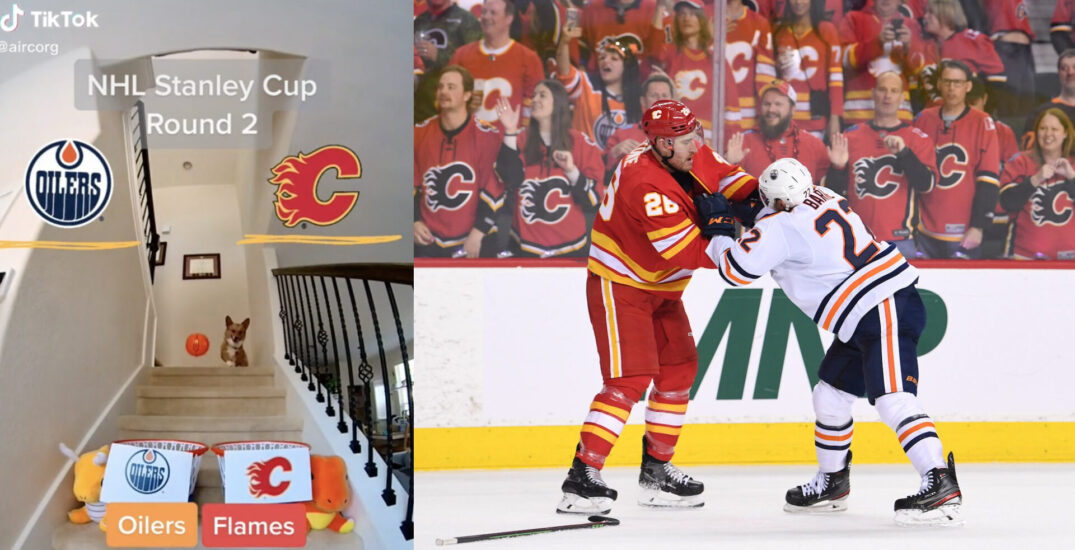 A dog known for making predictions on TikTok has weighed in about whether the Calgary Flames or the Edmonton Oilers will win the Battle of Alberta.

Lilo, the cute pooch known as @aircorg on TikTok, has amassed more than one million followers on the video sharing platform. She often makes predictions about sports team wins by hitting a ball into one of two baskets.

The Battle of Alberta, aka the second-round Stanley Cup playoff series between the Flames and the Oilers, is practically all anyone in the province can talk about these days, so it’s no wonder that a TikTok user asked the all-knowing doggo which team would take the round.

“Can you do the battle of Alberta?” requested @siddd91 in a TikTok comment on one of the dog’s other videos.

Ask, and Lilo shall deliver. In a video posted on Wednesday, the dog is posed in her usual spot at the top of a staircase. After someone off-camera tosses her a toy basketball ball, she nose-butts it towards two baskets near the bottom of the stairs.

Just as hockey teams play each other in multiple games in each round of the playoffs, Lilo repeats this process several times, set to “First Class” by Jack Harlow.

Much to Calgary’s dismay and Edmonton’s glee, the balloon landed in the basket labelled “Oilers” four times, and in the one labelled “Flames” only twice, making the more northern city the predicted winner of the series.

We’re not sure how accurate Lilo’s predictions are, but with a face that adorable, we won’t fault her if the guess is incorrect.

Who are you predicting will win the Battle of Alberta?