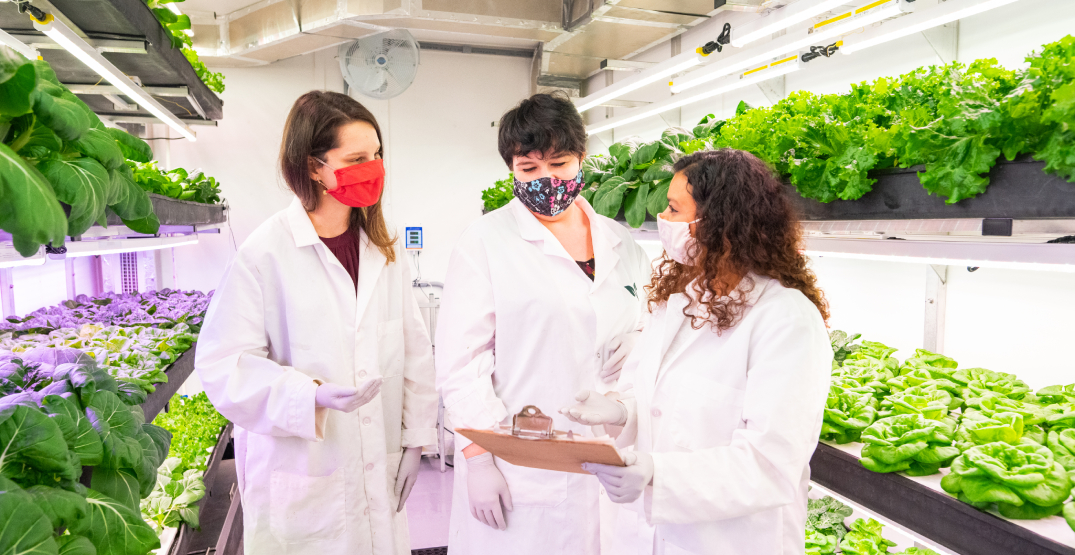 Inside a Growcer modular farm

As climate concerns are top of mind for many Canadians, we’re looking toward sustainable solutions to offer hope for a healthier future.

Unlocking local growing using fewer resources is only the beginning of the impact technologies like Growcer’s modular farms have on communities. The spillover opportunities include providing communities with more fresh and affordable produce options, offering increased local employment, and development opportunities, as well as decreasing onset illnesses such as diabetes, obesity, blood disorders, and other chronic illness that are linked to the consumption of processed foods.

That’s why RBC Tech for Nature’s support of the Kitigan Gamik Initiative is so exciting. With the mounting fears surrounding global warming and the subsequent pressures on our food system, new technologies — such as the one developed by the Growcer — offer a significant piece to a still very complex puzzle. “It’s one tool in a toolbox to start shaping what the future of local food looks like in Canada,” says Florent Schmahl, chief of staff at Growcer.

The Kitigan Gamik Initiative, launching in the fall of 2022, includes a land-based curriculum to provide culturally relevant, hands-on education and training in areas of food security and sustainability to Indigenous youth and is powered by the use of Growcer modular farms. With Kitigan Gamik meaning “garden yard/building,” these custom-built, insulated structures are slightly larger than a shipping container, and allow anyone to grow fresh produce anywhere, anytime, at a community large scale — meaning no more overpriced, wilted produce at the store, but fresh, affordable greens year-round.

Ultimately, the program aims to set a foundation for a long-lasting, sustainable food system within our communities, imparting both the infrastructure and local know-how to keep these projects providing for their local communities. 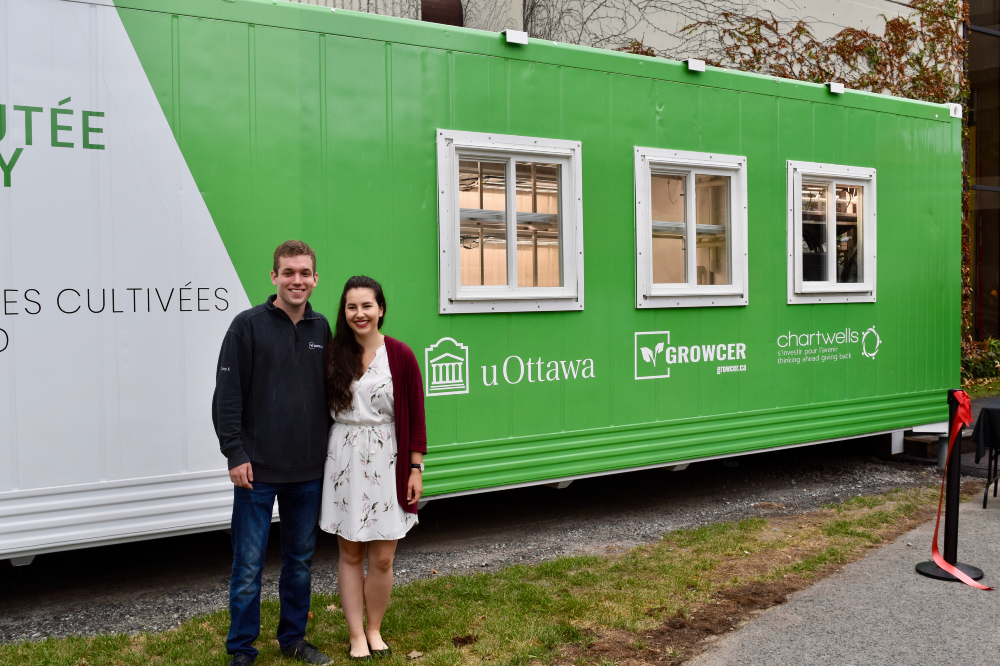 The project is a collaboration between multiple groups: RBC Tech for Nature, Growcer, the Ottawa Community Foundation, BDO Canada, and Indigenous communities in Manitoba and Saskatchewan. Each group has the common goal of creating an educational curriculum sustained by practical implementation to invest in the upcoming generation of Indigenous leaders.

“The curriculum will build knowledge around food sovereignty, climate change, and the environment, healthy living, science as it relates to food production, chemistry, biology, and business,” says Schmahl. “The curriculum will also focus on preserving traditional teachings on self-sufficiency and land-based knowledge.” 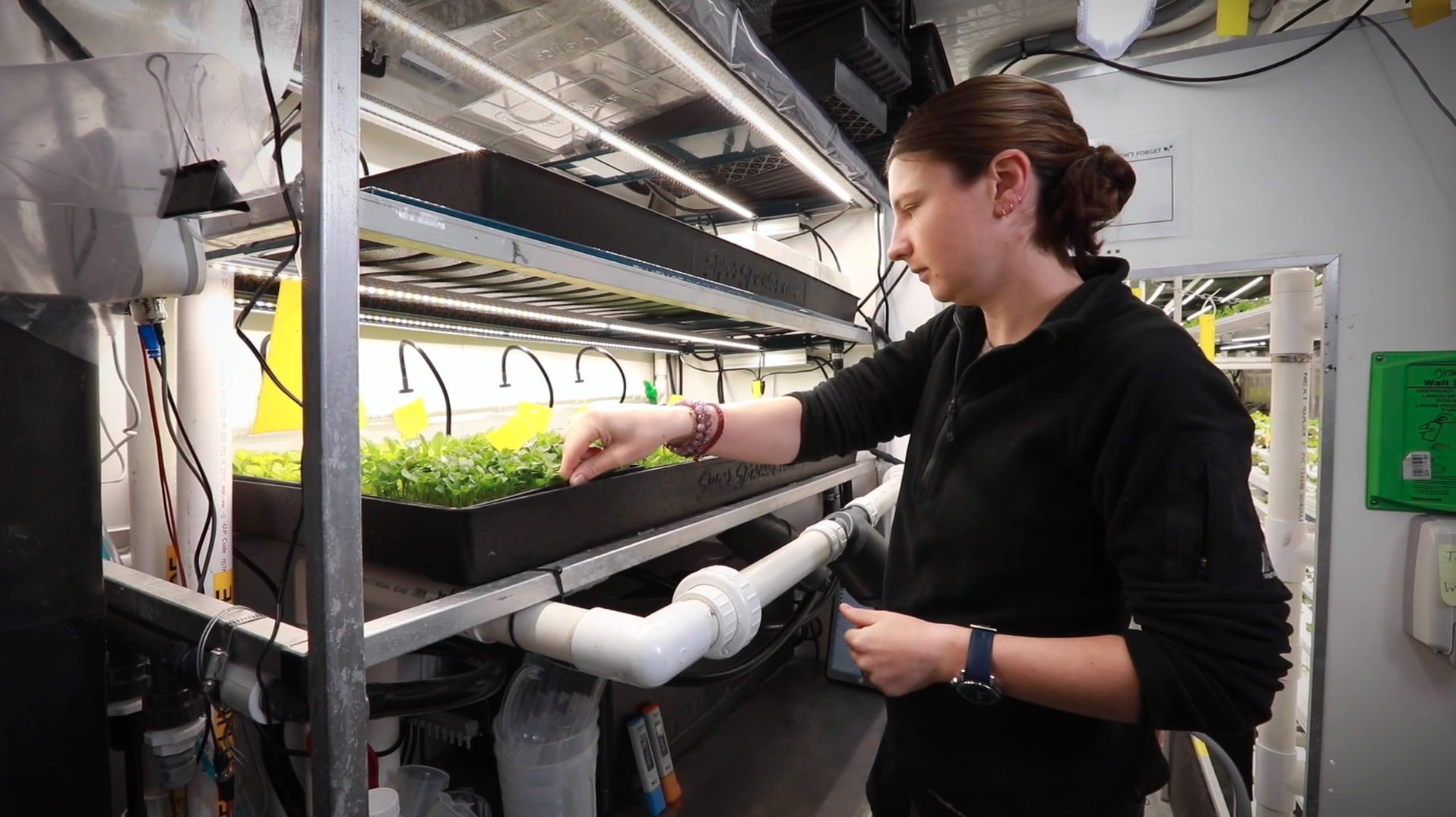 Once implemented, this K-12 curriculum will be set in motion, using Growcer modular farms as an extended classroom. Participating communities will use these hydroponic containers as a site for practical learning about growing food year-round. Schmahl explains that local educators will be trained in a “train-the-trainer deployment,” so that the knowledge of how to grow food always remains local.

“A sustainable and resilient food system also relies on the empowerment and education of future growers and leaders,” says Schmahl. “Programs like the Kitigan Gamik Initiative are crucial because they focus on connecting youth with the land and sustenance through gardening and growing food.”

Chief of Pine Creek First Nation and former Grand Chief of the Assembly of Manitoba Chiefs, Derek Nepinak, worked with BDO Canada and brought together Elders to consult on the development of the Kitigan Gamik Initiative. 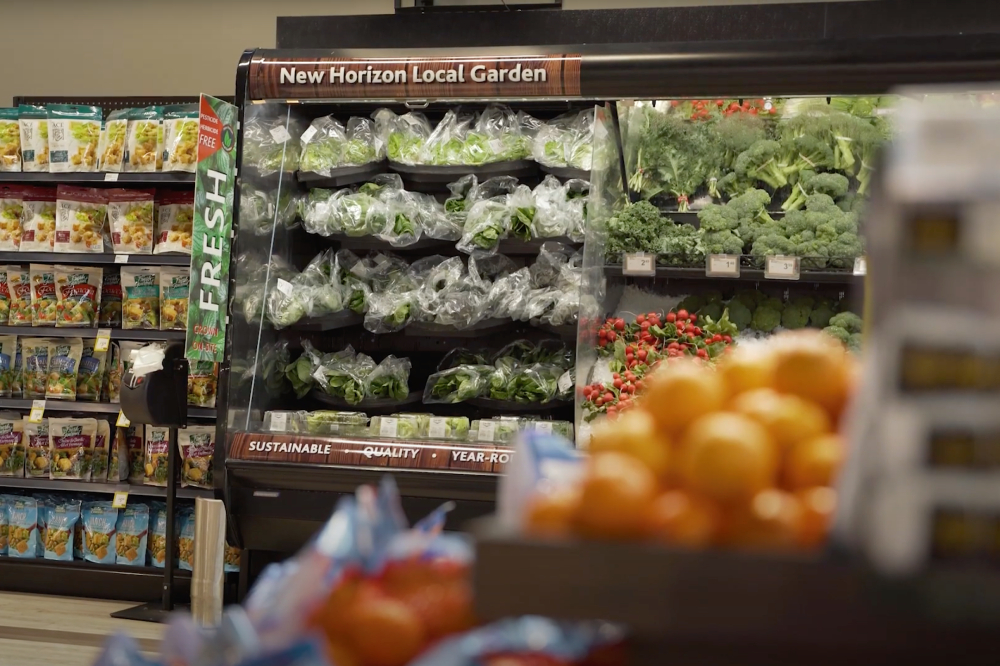 “The timing of this initiative is critical as conditions for growing food are changing rapidly in a changing climate,” says Nepinak. “The production of food has always been a land-based process, with success contingent on the right growing conditions at select times of nimama aki’s (Mother Earth’s), natural cycle. With rapid changes in climate, we cannot foresee the certainty that the conditions that we have taken for granted will remain. With this in mind, planning for climate change mitigation and strategy is paramount.”

This program’s timing couldn’t be more critical, agrees Schmahl, because the introduction of indoor growing technologies aid in the battle against the changing climate. “In our discussions with knowledge keepers, technology was embraced because there was no guarantee the environment would remain the same as it had been in the past,” he explains. “Growcer farms are an option for growing food year-round regardless of the outside growing conditions.” 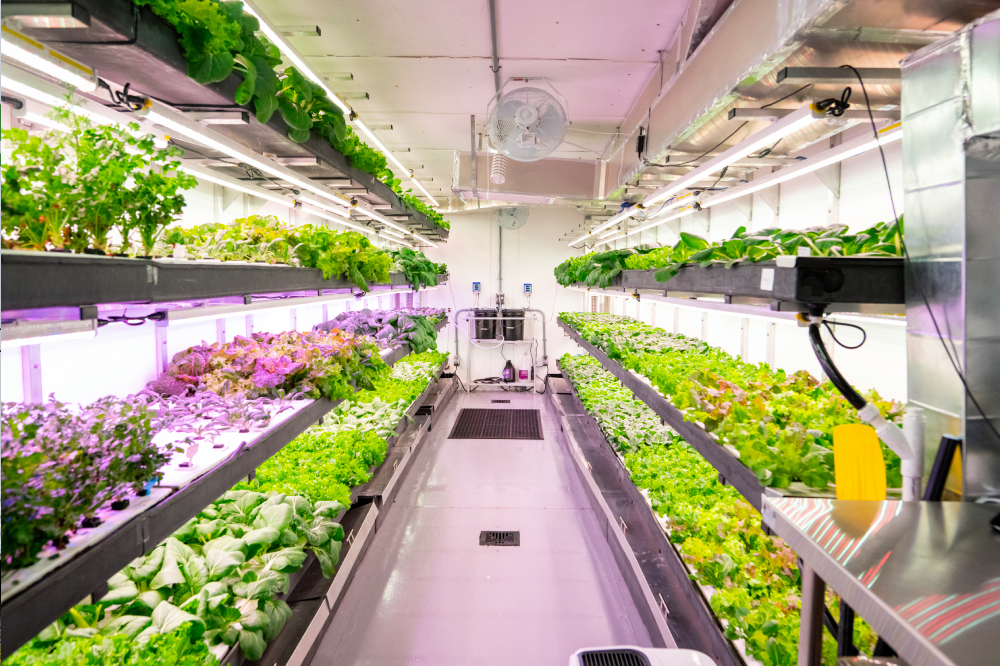 Even to those who know little about the technicalities of farming, Growcer modular farms sound pretty amazing — and that’s because they are. With more than 35 farms growing across Canada, these custom-built, insulated structures use hydroponics (using nutrient-rich water instead of soil) to grow a variety of leafy vegetables like lettuces, kale, spinach, mountain sorrel, and herbs like chives and mint.

Inside these container farms, growth factors such as light, nutrients, temperature, humidity, carbon dioxide, and water are monitored and adjusted in real-time, and plants are stacked vertically to maximize the space and use less water, time, and land. Schmahl claims that a single Growcer modular farm can produce up to 504 heads of produce weekly, or just under 27,000 heads of produce a year. 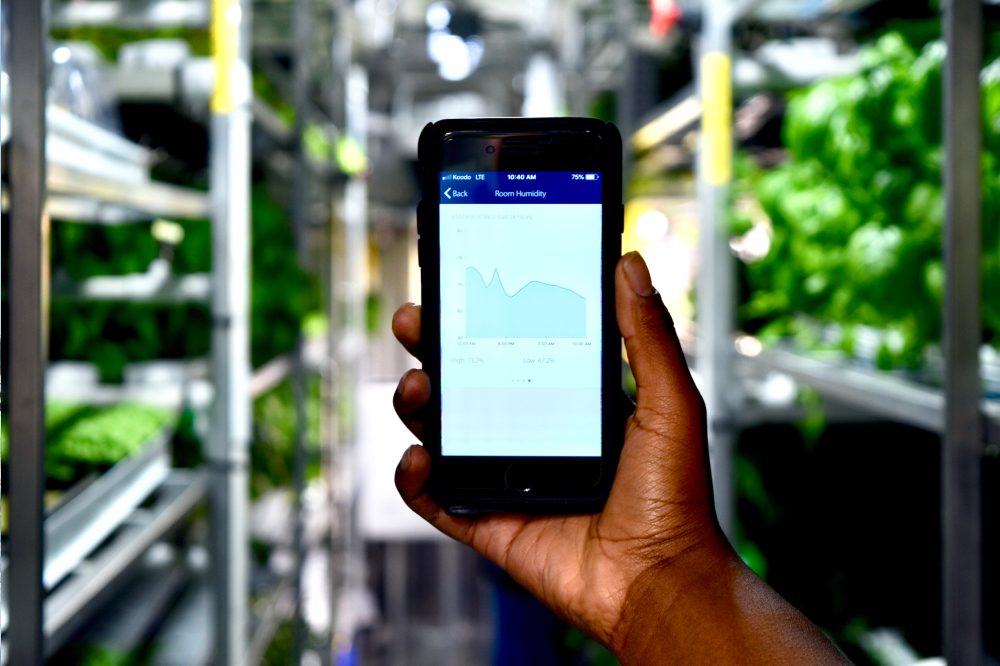 The growing environment in a Growcer modular farm is controlled in real-time and can be monitored remotely using smartphones. (Growcer)

Basically, all you need to make a Growcer farm work is water, power, space, internet, and a cool place to store your produce after.

According to Schmahl, it’s RBC Tech for Nature’s support that made it possible to launch the pilot stage of the Kitigan Gamik Initiative, seeing the development of the land-based curriculum and the “train-the-trainer” program. 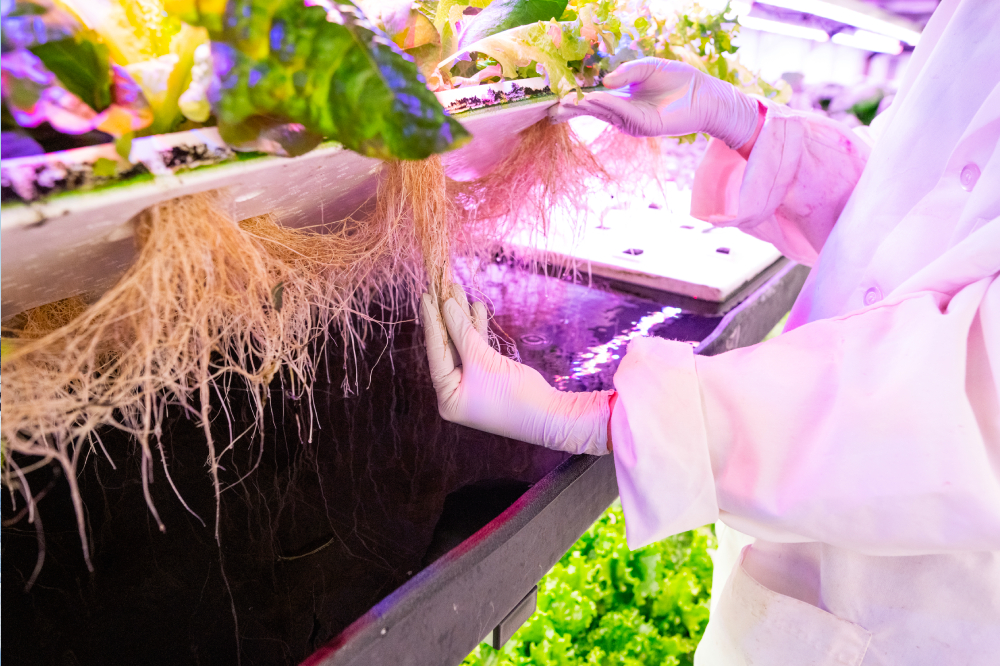 “We’re proud to be able to support projects like the Kitigan Gamik Initiative which will help Indigenous communities preserve traditional teachings on self-sufficiency and land-based knowledge while maintaining an increasingly important year-round supply of fresh produce,” says VP of Social Impact and Innovation at RBC, Mark Beckles. “At RBC, we believe in the power of an idea to transform lives. RBC Tech for Nature is committed to bringing the power of innovative technologies to address mounting environmental concerns.”

“Programs like the Kitigan Gamik Initiative will grow the next generation of gardeners, farmers, and land keepers, while also introducing innovative methods of food production that can respond to a changing climate,” says Schmahl. 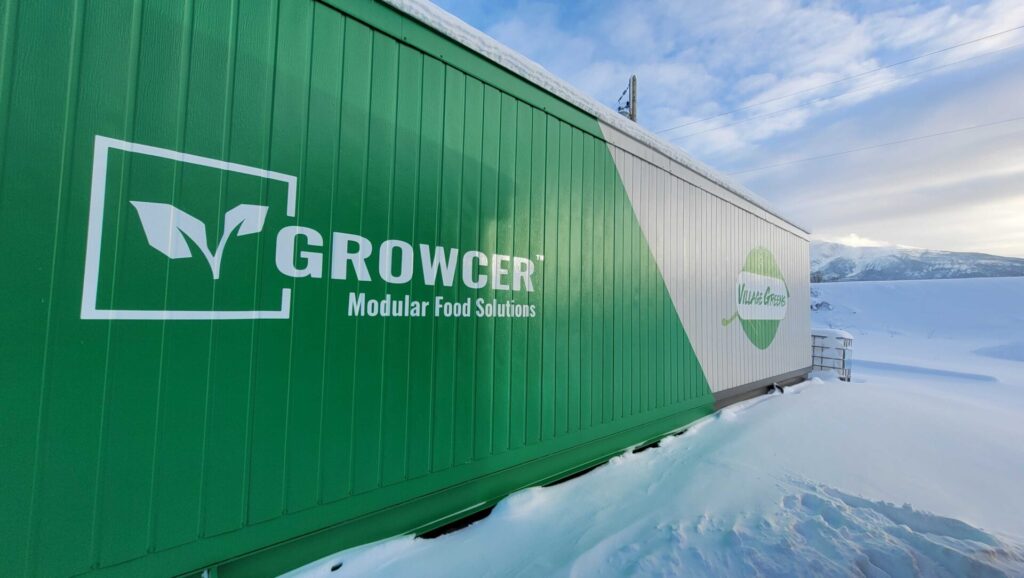 Growcer farms can grow nutritious greens in extreme climates and have been proven in conditions as low as -50°C. (Growcer)

“The value of entrenching these teachings in formal education is that they can then be replicated outside of the institutions of learning and taken back to the families individually, to begin growing independently again, or as a community working together,” says Nepinak.