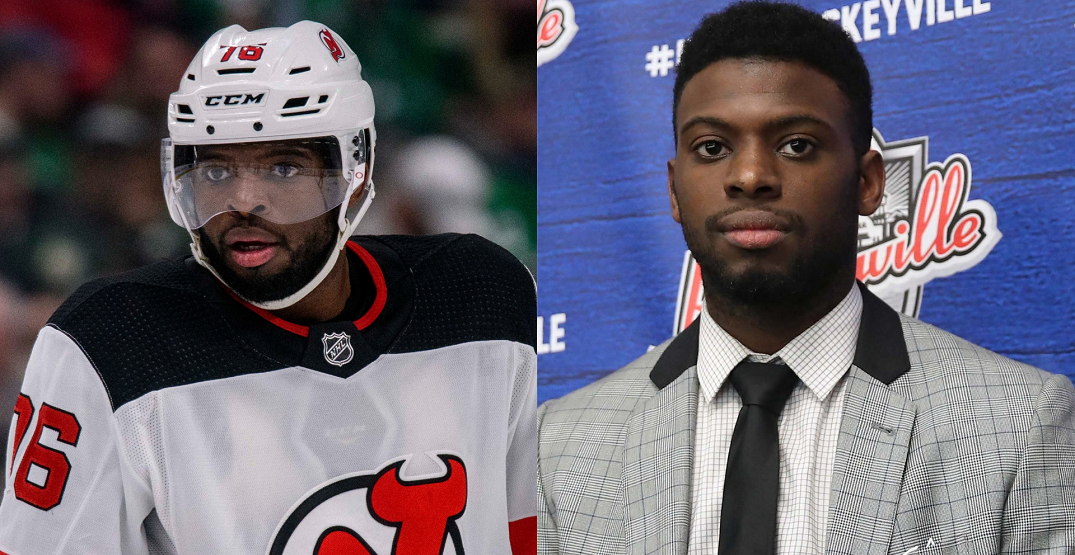 Trigger warning: This article contains descriptions and video of racist gestures and language.

New Jersey Devils defenceman P.K. Subban is speaking up after a racist gesture was directed at his brother Jordan during an ECHL game last night.

In a game between the Jacksonville Icemen and Subban’s South Carolina Stingrays, Subban, who is Black, was the target of a gesture from Icemen forward Jacob Panetta during an on-ice ice stoppage, prompting the two players to fight.

Jordan posted on Twitter that Panetta was “too much of a coward to fight” after making “monkey gestures”.

More like @JPanetta12 was too much of a coward to fight me and as soon as I began to turn my back he started making monkey gestures at me so I punched him in the face multiple times and he turtled like the coward he is. There fixed it 👍🏾 https://t.co/JtPqpN9wwE

Panetta was assessed a two-minute unsportsmanlike conduct penalty, a five-minute fighting major, and two ten-minute misconduct penalties: one for “inciting,” and one for fighting.

The elder Subban shared video of the incident, where Panetta appears to make “monkey gestures” at Jordan before engaging in the fight.

“They don’t call the east coast league the jungle because my brother and the other black players are the monkeys!” P.K. Subban wrote in his caption. “Hey @jacobpanetta you shouldn’t be so quick to delete your Twitter or your Instagram account you will probably be able to play again… that’s what history says but things are changing. Now not just the hockey world knows your true colours. Your hometown of Belleville knows, your family, and friends know you’re a fraud.”

Both Jordan and P.K. Subban played for the OHL’s Belleville Bulls in their junior careers, as did their brother Malcolm.

“When does it end,” Malcolm tweeted.

“With everything that has gone on in the past couple years in the world I’ll say with all due respect to everyone who has an opinion, this isn’t a mistake,” PK Subban added, also pointing out that fans could be heard saying racial slurs in the video. “We all know what’s ok and what’s not.“

Update: The ECHL announced that Panetta had been “suspended indefinitely pending a hearing under the Collective Bargaining Agreement,” while the Icemen posted that he had been released from the team. In a series of videos posted on Twitter, Panetta said that he was making a “tough-guy bodybuilder-like gesture.”

Members of the hockey community were quick to stick up for Subban, including former NHLer JT Brown and Hockey Night in Canada analysts Harnarayan Singh, David Amber and Louie DeBrusk.

Second racist incident in the same week Willie O’Ree was honored. SMH. How do we still have so far to go? Time for coaches/leagues to have a talk with their teams immediately. Back to basics clearly. Tell your players any bullshit like this and you’re done. Zero tolerance. https://t.co/gF6NRcYwZs

Speaking out is the least we can do to support. For those who are surprised racism still happens, plz WAKE UP. Many ppl of colour deal with it regularly, which is why it’s so important to take a stand/raise awareness. Comes down to RESPECT & we need a lot more of it in our world https://t.co/CXa2PTN5BF