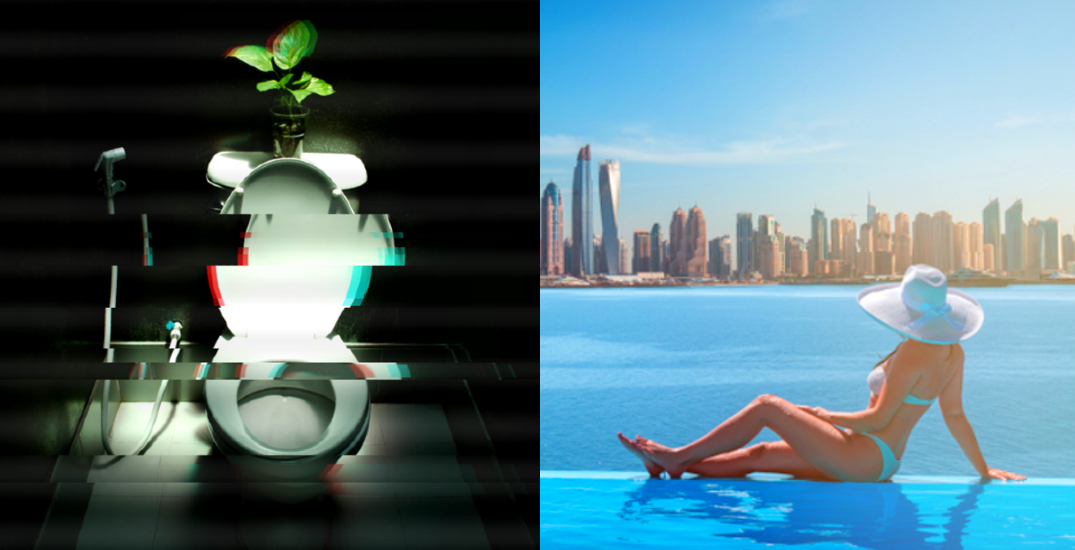 If you’ve been blissfully unaware of the search term “Dubai porta potty,” consider yourself lucky. But if you’re a morbidly curious individual who falls into dark internet rabbit holes during midnight scrolls, read on.

This will be one of the strangest stories you’ve ever been told.

Last month, videos emerged on TikTok about a concept rumoured to be real for years — influencers being paid to fly out to Dubai in order to be pooped on (or in) for cash, get expensive gifts, and experience extravagant hotel stays for free.

One of the first people to make the story go viral was TikTok user @chennifar.

Most of the TikToks that have followed are reactions or summaries from non-participants, with some including clips of women who’ve worked as Dubai porta potties reading their contracts or sharing their experiences.

One particular video shows a 26-year-old woman reading out a contract nervously, in which she consents to being flown to Dubai and getting an STD check to perform certain sexual acts on her client — a Sultan Ali — and have sexual acts performed on herself. The woman also says she’ll be participating in sexual intercourse with a client’s underage brother.

Aside from this, there are also NFSW clips online, showing women being defecated on, allegedly in the role of a Dubai porta potty. We will not be linking any of those. You may Google them, but be warned — everyone regrets Googling them.

so i got curious and searched up dubai porta potty and y’know what? that’s the last fucking straw. this is my 13th reason. i’m deactivating my whole fucking life bye. pic.twitter.com/hL9NIJMipp

According to African Insider, reports of Dubai porta potties being a real thing have been around since as early as 2016, and several confessions are available online to read and watch.

One website apparently dedicated to recruiting human toilets for Dubai’s wealthy — which includes local elites and rich foreigners — is dubaiportapotty.top.

It caters exclusively to the sexual fetish involving feces.

Daily Hive ran the web address through the Wayback Machine and Carbon Dating — both free tools to check when a website was created — and they estimated this website was set up in early 2021.

“Consider becoming a Porta Potty today and start earning 7 figures in $$$ within a short period of time,” the website homepage states. “The difference between the rich and the poor is not hard work but the ability to be smart, proactive, privy to vital information, and being in the right place at the right time.”

In all-caps, dubaiportapotty.top insists you consider this gig in an oddly phrased, almost cultish-sounding paragraph:

“NOW THAT YOU ARE ON THE RIGHT PLATFORM, TAKE ACTION FOR WE BELIEVE YOU ARE PREPARED. Remember, when preparedness meets opportunity success is borne and riches follow. With us you have the opportunity to change your life for good. Therefore, we enjoin you to take the appropriate actions today to better your life.”

Dubai has had a reputation for flying in sex workers and trafficking women into the sex trade for decades. It’s been called an international sex tourism hub, even though sex work is technically illegal across all states in the United Arab Emirates.

In a 2016 article, Americans for Democracy & Human Rights in Bahrain (ADHRB) reported on what this looks like in practice. For context, Bahrain borders the UAE and is one of the most populous countries in the Arabian Gulf.

Here’s what the ADHRB report states:

The reaction to the Dubai porta potty stories has been mixed. Most people are expressing disgust, but some say don’t care about what happens between two consenting adults indulging safely in kink.

But with some of the confessors alleging that children, animals, and non-consenting adults could be involved, the topic has evolved into a darker one — one that possibly garners investigation from law enforcement.