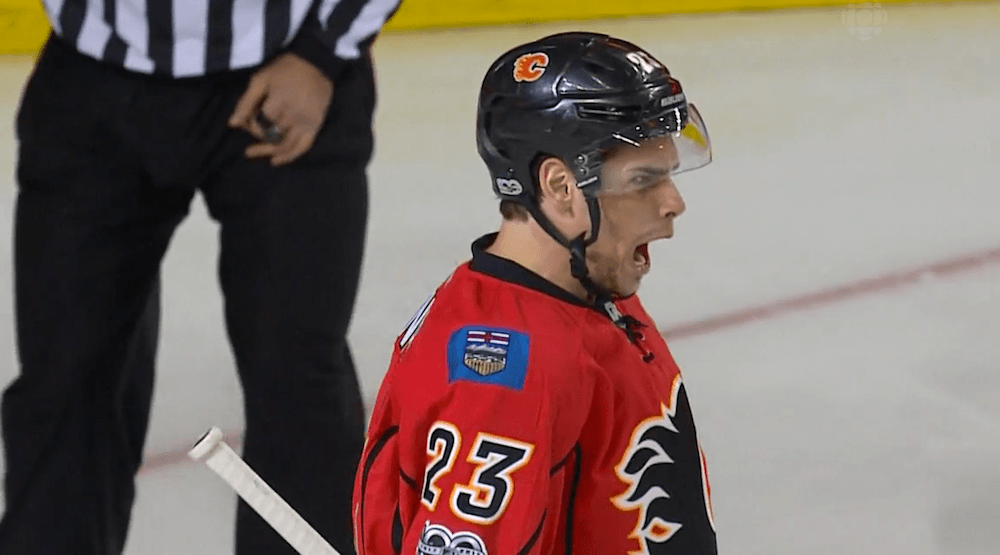 The Calgary Flames have a big hole to dig themselves out of, as they blew a 4-1 lead to lose 5-4 in overtime to the Anaheim Ducks in Game 3 on Monday. They’re down 3-0 in the series and will face elimination on Wednesday.

Corey Perry got the winner in a wild night of action, although many Flames fans will feel robbed of a win (more on that later).

The Flames’ power play was red hot in this game, punishing Anaheim for going to the box time and time again.

Nick Ritchie took an interference penalty early on, leading to a Sean Monahan power play goal 2:10 into the first period.

The Ducks didn’t learn their lesson, as Hampus Lindholm took a silly goalie interference penalty after he pushed TJ Brodie into Brian Elliott.

The Flames went to work again.

Kris Versteeg scored on a rebound, giving Calgary a 2-0 lead before the 10-minute mark.

Ritchie redeemed himself before the end of the period, to cut the lead in half at the intermission.

Michael Stone gave the Flames their insurance goal back early in the second period, firing home a point shot with Matthew Tkachuk screening in front.

The Ducks took another penalty in the second period, and once again the Flames made them pay. Korbinian Holzner took his second penalty of the game, hooking Johnny Gaudreau.

Cue Mark Giordano, who fired a shot on net that bounced off Sam Bennett’s skate and in the net with 11:27 left in the period to give Calgary a commanding 4-1 lead.

That goal chased Gibson from the net, giving way to Jonathan Bernier. At the time, we thought it was mop up duty. We thought wrong.

Before the end of the period, once again, Anaheim cut down Calgary’s lead to 4-2. Shea Theodore scored on a soft shot, which looked like it may have tipped off Dougie Hamilton’s stick before beating Elliott. Either way, it’s one that Elliott needed to stop.

With the Flames in control past the midway point of the third period, we had a little bit (turned out to be a lot) of controversy to deal with.

Nate Thompson tipped a shot in, which the on-ice referees called a goal.

After a coach’s challenge and a lengthy video review, somehow the call stood. The Ducks were now within just one goal.

I'll punt that video review guy over the McMahon speaker. Go work at Foot Locker- you should not be calling playoff hockey. #Flames

Here’s the replay that appeared to conclusively show Thompson’s stick was above the crossbar.

The Ducks completed the comeback with under five minutes left in the third. Theodore scored his second goal of the game, getting a fortunate bounce off a body in front of the net. Tie game, 4-4.

Fans at the Saddledome were shocked, as this game was headed for overtime.

A lucky bounce made possible by some hard work in front of the net by Nate Thompson resulted in an Elliott rebound going off Stone and into the net.

Perry got credit for the winner on a goal Elliott might like to have back. To be fair, Stone getting manhandled in front didn’t help matters as he was standing in the crease.

It wasn’t a banner night for Elliott, although expect him to still get the start in Game 4 on Wednesday.