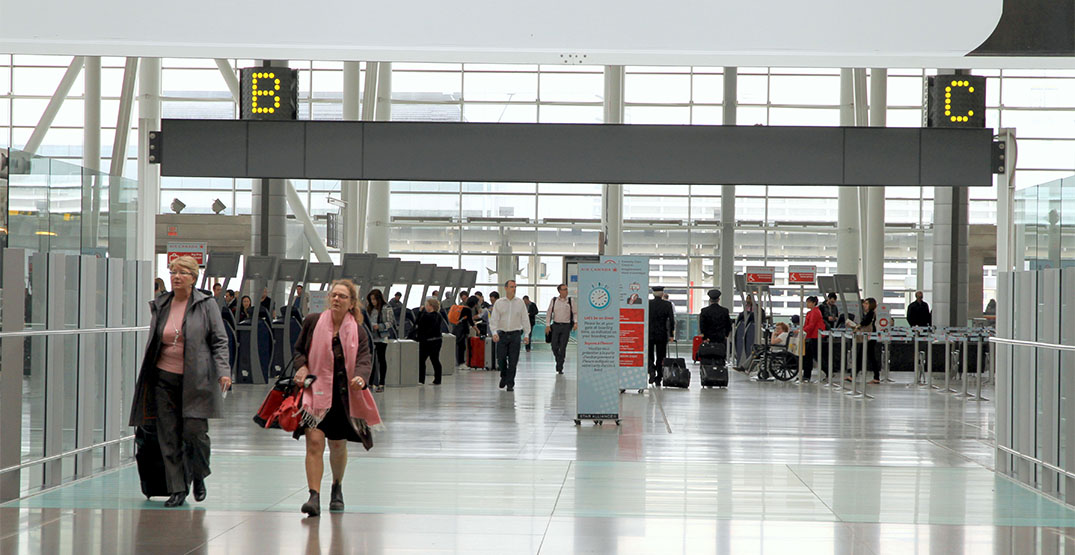 A staff shortage at the Canadian Air Transport Security Authority (CATSA) has led to long lines at major airports in recent weeks as traveller volume returns to levels not seen since pre-pandemic, with only a fraction of security screening officers.

The head of a national union representing the airport security screeners told Daily Hive the issue could last through the summer because it won’t be a quick fix to hire and train enough people to get the lines moving again.

In the meantime, passengers trying to catch a flight in Canada may want to check the lineup status on CATSA’s online tracker.

The security authority posts wait times for 14 airports across the country by scanning passengers’ boarding passes when they enter the lineup and again as they pass through the checkpoint.

Wait times at Vancouver International Airport on May 9, 2022. (CATSA)

CATSA notes these times don’t account for the extra time passengers need to drop off a checked bag, get bags screened at security, go through customs for a US flight, or walk to the boarding gate.

“The wait times presented here are provided for convenience only and are not intended to be a substitute for proper preparation before departing for the airport,” CATSA says on its website.

On Monday, the longest posted wait times were in Vancouver and Toronto.

Security lines can vary depending on how many flights are taking off at once, but employees have told Daily Hive that only a fraction of security lines can open right now because there aren’t enough staff to operate at full capacity. In Vancouver, only five out of 14 security lines were open last week, and the Ottawa International Airport was only able to open two of five domestic lines.

The CEO of CATSA apologized for the long wait times last week, and YVR has asked people to show up three hours early for their flight.

Travellers have shared differing experiences on social media, with some saying they arrived three hours early and breezed through, while others said waiting in line was a real test of patience.

“To all the girlies telling me YVR airport security is so long and to show up three hours before my flight: go [expletive] yourself, now I’m here three hours early for my flight,” TikTok user @oofelyk said on May 6.

But things were different out of Toronto’s Pearson International Airport at 4 am a couple of days later.

“Just in case anyone’s wondering whether the lines are really that bad — they are,” TikTok user @jennweatherhead said on May 8.

Employees Daily Hive spoke with said low wages and tough working conditions are contributing to staff shortage. In some cases, employees have to delay their bathroom breaks until a qualified person can replace them at their station.

Employees say they’re expected to keep up a breakneck pace of work while maintaining accuracy. If a CATSA auditor catches an officer slipping up, their qualifications to operate machinery may be revoked, further slowing down the line, a manager in Ottawa told Daily Hive.

Security screening officers in Ottawa made between $19 and $23 per hour. In Vancouver, they make less, between $18 and $22 per hour. For many, that’s below the Canadian Centre for Policy Alternative’s living wage in Metro Vancouver: $20.52 per hour as of 2021.

Both workers and their union are asking for patience from the public as they deal with long lines and ask travellers to do their part to speed things up by packing liquids in gels in a clear plastic bag.