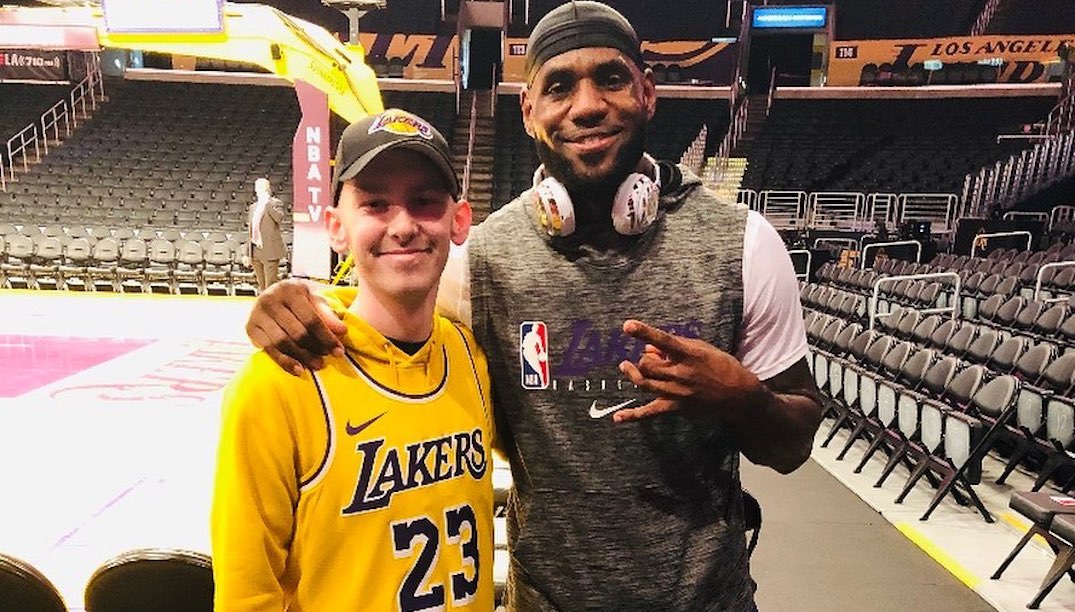 Corey Groves from Brampton, Ontario, was diagnosed with highly aggressive stage-four sarcoma cancer about six months ago. Since receiving his diagnosis, the 17-year-old has been through numerous rounds of aggressive chemotherapy and radiation.

Despite the 15% survival rate for his type of rare cancer and being told he has some where between under a year to three years to live, Groves takes each day with a smile on his face, as evidenced by his Instagram account.

Groves’ Instagram account also shows how big of a Los Angeles Lakers fan he is, which is why when he was granted a wish from the Children’s Wish Foundation earlier this year, he immediately knew he wanted to meet his hero.

According to a GoFundMe page that was started to raise funds to help pay for Groves’ treatment, the teen created his Instagram account to help get James’ attention so his dream of meeting him could come true.

And Nav Bhatia made sure Groves got his wish.

According to an update on Groves’ GoFundMe account, the teenager had “one amazing Christmas to remember.”

Groves was invited to the Lakers’ pre-practice game, where his wish came true.

“He shook the hand of his hero LeBron James!” reads the update.

“It was a rollercoaster beginning that slid nicely into place when he was surprised with the offer to go watch the Lakers practice, and it just got better from there.”

The family thanked Nav Bhatia, who runs the Superfan Foundation as “a way to unite people through the love of sport.”

As for Groves, he shared the photo with James that said, “Merry Christmas. I got my wish. So thankful to everyone that helped make this happen.”

Merry Christmas 🙂 I got my wish .so thankful to everyone that helped make this happen 🙂 @kingjames @coreyswish2019 #coreyswish2019