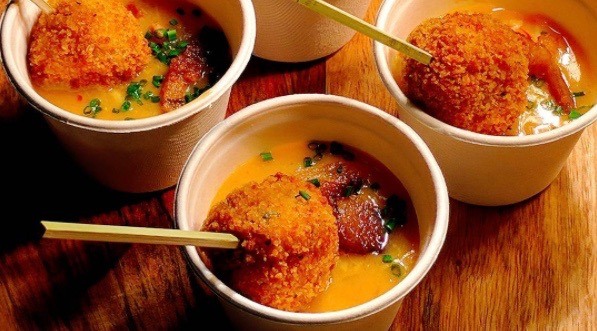 The top Ocean Wise Chefs in Calgary went head to head on November 17 for a gripping annual culinary competition – the Chowder Chowdown.

The YYC edition of the Chowdown went down at the Hyatt Regency Calgary. This was the last of the four-province event, which also took place in Halifax, Toronto, and Vancouver.

This delicious showdown had some seriously worthy victors, like the People’s Choice Award winner, Thomsons Restaurant at the Hyatt Regency. The restaurant’s chowder was a combo of creamy andouille sausage and prawn chowder with kimchi.

This is the third year in a row that the Thomsons Restaurant has won this title, but each win has been an entirely different recipe from a different chef, so there’s nothing fishy about this winning streak.

The judges panel was made up of industry pros like Michael Allemeier, John Gilchrist, Dan Clapson, and Daily Hive contributor Buzz Bishop, all who ultimately chose Catch Restaurant & the Oyster Bar’s chowder as the overall winner.

The last award of the night went to Last Best Brewery & Distilling for Best Beer Pairing.

All proceeds from this event directly support Ocean Wise, a Vancouver Aquarium conservation program created to educate people about the issues surrounding sustainable seafood and how they can help.